A new study finds that the introduction of “right-to-work” laws has reduced the unionization rate by 2.1 percentage points and lowered worker wages by 2.6% in Indiana, Michigan, and Wisconsin.

Recent “right-to-work” laws have had negative consequences for many workers in Indiana, Michigan, and Wisconsin, according to a new study by researchers at the University of Illinois at Urbana-Champaign and the Illinois Economic Policy Institute.

The analysis focuses on labor markets in six Midwest states from 2010 through 2016. Indiana, Michigan, and Wisconsin all enacted “right-to-work” (RTW) laws during this period, providing a regional experiment on the effects of the laws. Three neighboring states– Illinois, Minnesota, and Ohio– serve as a comparison group because they did not have RTW laws at the beginning of the time frame and still do not have RTW today.

As of 2016, there were significant differences between the two groups of states. Notably, workers in Indiana, Michigan, and Wisconsin earned 8% less per hour on average than their counterparts in Illinois, Minnesota, and Ohio.

However, the authors note that these economic indicators could be due to many factors other than whether the state enacted a RTW law, such as educational attainment, occupation, and demographics.

After accounting for these and other important factors, the analysis finds that the introduction of RTW laws has reduced the unionization rate by 2.1 percentage points and lowered hourly wages by 2.6% in Indiana, Michigan, and Wisconsin.

RTW laws have had particularly adverse impacts on occupations that have traditionally provided middle-class careers for workers in the Midwest. As examples, RTW has statistically reduced the hourly earnings of construction and extraction workers by 5.9%, of workers in service occupations (including police officers and firefighters) by 3.1%, and of workers in professional, educational, and health occupations by 1.9%. 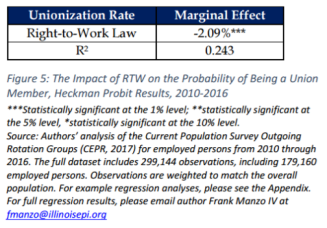 Similarly, the negative impact of RTW has been largest for workers with levels of educational attainment that typically provide pathways into the middle class in the Midwest. RTW has decreased the wages of workers with bachelor’s degrees, associate’s degrees, and some college experience by over 3% percent, while having no effect for workers with Master’s degrees or with professional or doctorate degrees.

Based on early data on the impact of “right-to-work” in the Midwest, the laws have likely contributed to the shrinking middle class in the region. RTW has especially hurt working-class Americans, including those in construction, protective services, office support jobs, and those with two- and four-year college degrees.

These findings echo previous research on RTW laws. Economic studies consistently show that RTW reduces worker earnings by 2-4%. By reducing unionization, RTW has helped to redistribute income from middle-class workers to the wealthy, boosting owner income by 2% with “little ‘trickle-down’ to the largely non-unionized workforce.”

Lawmakers in Illinois, Minnesota, Ohio, and other states should consider these research findings when debating the merits of a “right-to-work” law for their state.

For more about the Project for Middle Class Renewal at the University of Illinois at Urbana-Champaign, please visit the Project’s website or like the Labor Education Program on Facebook.