That’s according to a new study, The State of the Unions 2018: A Profile of Unionization in Wisconsin and in the United States. Conducted by researchers at the Midwest Economic Policy Institute, the Project for Middle Class Renewal at the University of Illinois at Urbana-Champaign, and the School for Workers at the University of Wisconsin-Extension, the study assesses how Wisconsin’s labor movement is faring over the past decade. It is the 3rd annual report of its kind on union members in Wisconsin.

Prior to the Walker administration, 14% of Wisconsin’s workforce belonged to a union. By last year, that figure dropped to 8%, significantly below the national average. Public sector unionization plummeted from 50% in 2011 to 19% in 2017. In states where Democrats are a majority in one or more of the branches of government– such as in Illinois, Minnesota, California, and New York– unions have not suffered such losses. 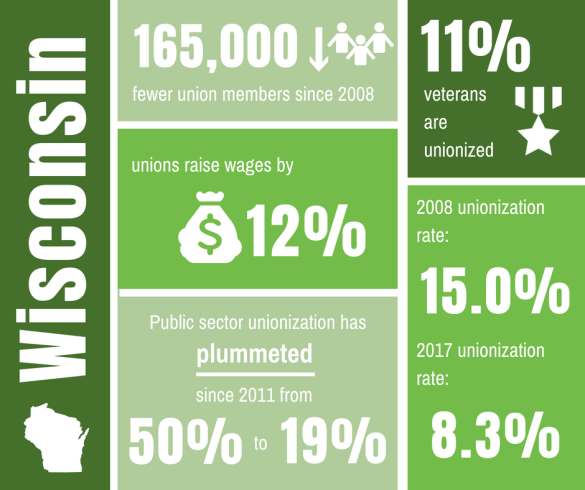 While there has been numerous attacks on labor unions in Wisconsin, labor unions continue to boost worker earnings. In Wisconsin, unions raise wages by an average of 12%. The state’s union wage effect is the 7th-highest in the nation. However, unions lift wage more for lower-income workers.

Nevertheless, the dismantling of unions in Wisconsin has contributed to rising income inequality. The wage of the median worker increased by 3% in Wisconsin from 2014 to 2017. Meanwhile, the top 1 percent in Wisconsin saw their hourly earnings rise by 9%. This rise in income inequality (+5.5%) exceeded the comparable increase in the rest of the country (+0.3%).

The study finds that Wisconsin’s labor movement, like the rest of the United States, continues to face both short- and long-term challenges due to the political environment, the makeup of the U.S. Supreme Court, and broader economic trends. Labor’s response to these challenges will define its influence and effectiveness in the years to come and will be critical to building and promoting Wisconsin’s middle class.