A new study released today finds that organized labor still plays a role in Wisconsin’s economy, despite a decline of approximately 136,000 union members over the past decade.

The study, The State of the Unions 2016: A Profile of Unionization in Milwaukee, in Wisconsin, and in the United States [PDF] was conducted by researchers at the Midwest Economic Policy Institute, the Project for Middle Class Renewal at the University of Illinois at Urbana-Champaign, and the School for Workers at the University of Wisconsin-Extension. 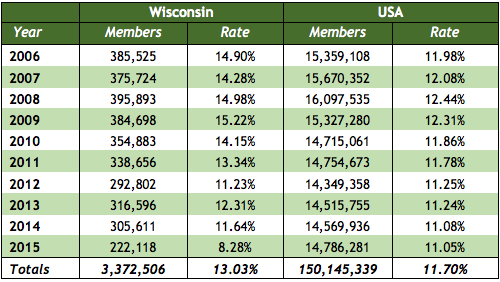 Efforts to weaken the labor movement in Wisconsin have disproportionately impacted these workers.

In Wisconsin, unionization still tends to increase individual incomes by lifting hourly wages. In Wisconsin, unions raise worker wages by an average of 11.0 percent. The state’s union wage effect is the 14th – highest in the nation. The union wage differential is greatest for the lowest 10 to 25 percent of workers, ranging from a 12.0 percent to a 12.7 percent increase in worker earnings. Unions therefore foster a middle-class lifestyle in Wisconsin.

Unions play a vital role in Wisconsin’s economy and communities. The Wisconsin labor movement, however, will continue to face both short- and long-term challenges. Labor’s response to these challenges could define its influence and effectiveness in the decades to come.

The State of the Unions 2016: A Profile of Unionization in Milwaukee, in Wisconsin, and in the United States can be found here.

One thought on “The State of Wisconsin’s Unions in 2016”